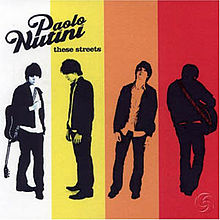 These Streets is the debut studio album by Scottish singer-songwriter Paolo Nutini, released by Atlantic Records on 17 July 2006. Preceded by the single “Last Request”, the album debuted and peaked at number 3 on the UK Albums Chart and was later certified with five Platinum by the British Phonographic Industry for domestic shipments in excess of 1,500,000 copies. It also entered the charts in many other European countries, and in 2011 it was certified double Platinum by the International Federation of the Phonographic Industry for sales of over 2,000,000 copies in Europe.